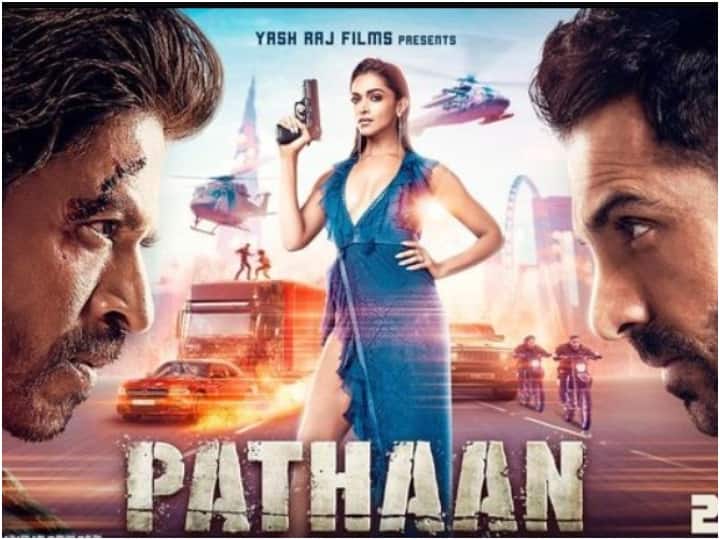 Pathan Screening : The much awaited film ‘Pathan’ has been released in theaters on 25 January i.e. today. This spy thriller has been directed by hitmaker Siddharth Anand. SRK is returning to the silver screen after a long break of 4 years with ‘Pathan’. With this, the pair of Bollywood’s most popular onscreen Shah Rukh Khan and Deepika Padukone will once again be seen doing wonders on the big screen. ‘Pathan’ is produced by Yash Raj Films. At the same time, before the release, the Pathan team had also organized a special screening of the film in Mumbai on Tuesday night. In which many stars of B Town including the starcast of the film arrived.

Shahrukh and John twinning in black at the screening
Ahead of the film’s grand release, the makers held a low-key screening for ‘Pathan’ in Mumbai on Tuesday night, January 24. Shahrukh Khan, the lead actor of ‘Pathan’, reached the screening with his wife Gauri Khan. The Bollywood superstar looked handsome as ever in a semi-formal black shirt, which he teamed with matching black trousers and a statement black necklace. At the same time, John Abraham, who is playing the role of Villain in the film, was also seen twinning with SRK in a black outfit. For a handsome look, he chose a black T-shirt which he paired with a matching hooded sweatshirt and black trousers.

Deepika also reached the screening of ‘Pathan’
For the fourth time from ‘Pathan’, the pair of Deepika Padukone and Shah Rukh Khan will be seen on the screen. At the same time, during the screening of the film, as always, Deepika looked very beautiful in a light brown colored sweatshirt. The actress complemented her look with matching brown trousers, signature free, messy hairdo and minimal makeup.

‘Pathan’ is a film from the Spy Universe of Yash Raj Films.
Let us tell you that ‘Pathan’ is the next installment of Yash Raj Films’ Spy Universe after Salman Khan’s blockbuster ‘Tiger’ franchise and Hrithik Roshan – Tiger Shroff starrer ‘War’. The film stars Shah Rukh Khan as an ex-RAW field agent who returns to the field after a long break to protect India from the dreaded leader of terrorist group ‘Outfit X’ Jim, played by John Abraham. On the other hand, Deepika Padukone is playing the role of a spy who joins Pathan’s mission in Siddharth Anand’s ambitious film.

read this also:-Pathaan: Fan’s question to ‘Pathan’, can we fall in love in the theatre? Shahrukh said – what about romance, it can happen anywhere